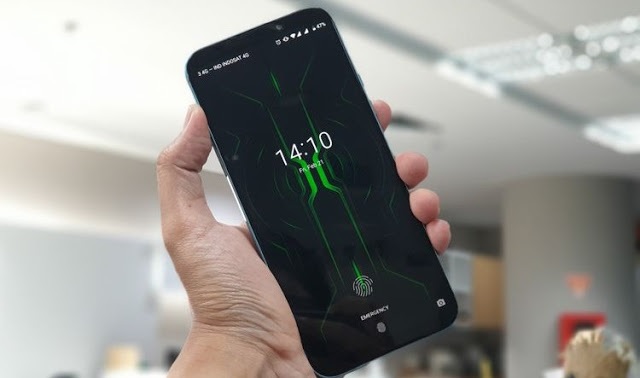 Black Shark released its newest gaming smartphone in mid 2020. Snapdragon 865 Flagship SoC, 8GB RAM, Shark Space 3.0, Master Touch 3.0, 90Hz Amoled Screen, and 5G, will make the gaming experience on this smartphone even more enjoyable, and ready for the future.
On this occasion, we also tested his ability to play games, and there are many games that we tested this time. What are the results like? see our review until the end.
Design and Specifications
Black Shark 3 has a Console Holding Symmetry design, with a choice of Midnight Black colors that were present on our test table this time. The rear body has a material that is a combination of glass and metal, and the frame or frame is metal. The dimensions are 168.7 x 77.3 x 10.4 mm and weigh 222 grams.
On the right side is the Shark Space button, Power button, and microphone, while on the top side is a 3.5mm headphone jack. On the left side, there is a SIM card slot and Volume button, and on the bottom side is a USB Type-C port and a micrphone.
The camera on the back of the smartphone consists of a three camera setup equipped with an LED flash, the Black Shark logo which can be set to light up which colors and effects, and a magnetic pin to place 14W magnetic wireless charging which is sold separately. While on the main screen, there is a selfie camera and front facing speaker.
The screen size of the Black Shark 3 is 6.67 inches with a resolution of 2400 x 1080 pixels FHD + and a ratio of 20: 9. The panel itself already uses AMOLED, DCI-P3, Delta E <1, 90Hz refresh rate with MEMC Technology. To fully support it as a gaming smartphone, Black Shark 3 has Touch Reporting Rate 270Hz with Brightness up to 500 nits. The screen also has TUV Rheinland VDE certification to be able to better protect the eyes of its users, is equipped with In-Display Fingerprint and has Master Touch 3.0 which consists of 3 Pressure sensors and has a pressure area of ​​more than 48%
The main specifications themselves use a Qualcomm Snapdragon 865 SoC, 8GB RAM, 128GB of internal storage, and a 4720mAh battery capacity that supports 65W Hyper Charge. Black Shark 3 runs on JOYUI 11 based on Android 10.
Shark Space 3.0, which is an assistive feature for the gaming experience of its users, can be activated easily using the dedicated Shark Space button located on the right side of the smartphone. Shark Space also functions to manage various configurations of each game that you want to play more easily, equipped with complete supporting features.
Black Shark 3 has more than enough sensors for everyday use and gaming, such as the accelerometer sensor, light sensor, orientation, proximity, gyro, and so on. And the connectivity itself is 5G ready, which is automatically included in its Snapdragon 865 SoC, equipped with Wi-Fi 6 2.4 / 5 GHz, Dual-X Antenna, and Bluetooth 5.0. Unfortunately, Black Shark 3 is not equipped with NFC.
The main camera which consists of three cameras each has a resolution of 64 MP Super Clear Camera f / 1.8 + 13 MP ultra-wide Snapper f / 2.25 + 5 MP Bokeh f / 2.2. While the selfie camera has a 20 MP sensor with f / 2.2 openings and Fixed Focus. The main camera is capable of recording video up to 4K 60 fps quality, and recording Slow Motion video up to 1920 fps. And for the selfie camera, it can record 1080p quality videos at 30 fps.
The sales package of the official Black Shark 3 is quite complete, equipped with the following:
Performance Tests
After discussing the specifications in full, now we will enter into smartphone testing using the benchmark set that we generally use. The tests consist of AnTuTu 7, AnTuTu 8 which we will provide a comparison using Fun Cooler and not, Geekbench 4, Geekbench 5, 3DMark Sling Shot Extreme, and GFXBench.
Gaming Test
Because it bears the name "smartphone gaming", of course for this test, we tried dozens of different types of games to play using Black Shark 3. We configure all games using Ludicrous Mode where the limits on performance and temperature are maximized. In order not to overheat, we use the additional cooler Fun Cooler Pro, which is included in the Black Shark 3 sales package.
The games we used for this test were as follows:
Battery Test
The next test is a test of battery life, with the first test using PUBGM playing at 60 fps and 90 fps for 30 minutes. As a result, battery life is reduced by 9% at 60 fps, and by 13% at 90 fps. For charging, Black Shark 3 supports 66W Hyper Charge, and interestingly, it only takes 40 minutes to recharge the battery from 3% to 100% full.
Working Temperature
After performance and battery testing, the next test is to measure its working temperature by running the CPU Throttling application for 30 minutes. The result, using Fun Cooler Pro or not, has almost the same results. There is no throttling, with temperatures reaching up to 90 degrees Celsius when not using the Fun Cooler Pro. Meanwhile, if you use Fun Cooler Pro, the temperature will be a maximum of 73 degrees Celsius.
For surface temperature using FlirONE, without Fun Cooler Pro, the screen temperature shows a maximum number of 49 degrees Celsius with the rear body around 48-50 degrees Celsius. While using the Fun Cooler Pro, the smartphone gets cooler with a screen temperature of around 33-36 degrees Celsius, and the back near the CPU area is only around 20 degrees Celsius.
Price
The selling price for the Black Shark 3 is USD $777.59
Facebook
Twitter
Pinterest
More
Less
Tumblr
Mix
E-Mail
GMail
LinkedIn
Reddit
XING
WhatsApp
Hacker News
VK
Telegram
Line
Prev Home